The, petite, booty-full, propagandist, “Kim Kardashian,” is tweeting from her twitter the praises of products, and using purposeful PR tactics, producing lots of PROFIT…so some say…

Several news blogs reported earlier this year, the petite, reality-fame’ster, allegedly gets $10,000 per endorsed product-tweet on Twitter (“I tawt I taw a Kar-DAT-dian-tweet,” says TWEETY!). Although Kardashian denies these reports, CEO, “Sean Rad,” of the advertising company, “Ad.ly’s,” says she is their “highest paid” tweeter (or is it twitterer-er?), but are limited to one tweet per day. “Twitter, tweeter…twatter — I wouldn’t care what you called me, or “it” for $10,000 a pop!

In 2009, the FTC (Federal Trade Commission) put out new disclosures rules on paid Internet endorsements that require all 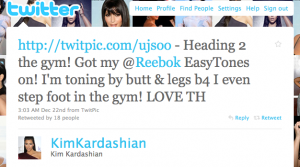 sponsored content to be clearly identified, as QUEEN of the Blogs, blogger “Perez Hilton” does by prefacing each advertised tweet with the word, “SPONSORED.” Kardashian’s rules (and tweets), however, border between the clarity of personal or endorsed, in which the over “3.9 MILLION” followers can’t really tell, with tweets like…

“Heading 2 the gym! Got my @Reebok EasyTones on! LOVE THESE! Go get’em at @Dickssportcmo,” and, “Have u guys seen QuickTrim at CVS? Its now available at all of their pharmacies!” and of course, “The Carl’s Jr chicken salads came out yesterday!! I’m on my way to Carl’s Jr for lunch now…have you tried them yet?” 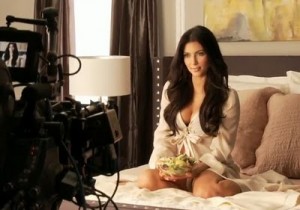 I’m sure you all know by now that Kim Kardashian did a very sexy commercial for Carl’s Jr, which “Ad Age” (another advertising company) also claims she gets paid $10,000 for every tweet.

Kim retorts, in a reported released statement on the matter, “I want to clear this up…Carl’s Jr did not pay me to tweet about their salads…Am I not allowed to talk about something I like without people assuming I must have been paid to do it?” 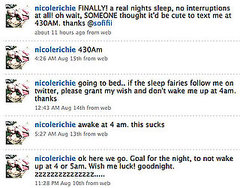 Kadashian goes on to say, “I want my fans to know what products, gadgets, foods, clothes and beauty products I like, and I love sharing that with my fans.”

Really Kim? So much so that you would take time out of your busy day and “blog” about it? Hmm, I don’t know…your statement, to me, sounds like it has a little “dressing” to it <yuck, yuck!> (I know, bad joke…but you get what I’m saying, right?). I highly doubt, this (quoted) “extremely busy…I have no time for myself,” petite-tweeter, twitter’s about “salads,”… or “shoes,”… or the “gym,”… or “pharmacies.” If caught, or if the FTC

finds that she is not playing by the “rules,” she can be fined up to $11,000 per infringement!

Evidently, the trend for Celeb-Ad-Tweets are here to stay — “OK! Magazine” reports that pretty-petite, 5’1” Nicole Richie and Audrina Patridge earn up to $10,000 as well, for companies like Sony and Nestle. It is also reported that the biggest earners for these companies are “Britany Spears” (also a petite) and “P. Diddy,” who can earn up to $20,000 per tweet!

NOW THAT’S A LOT OF TWEETIN’-MONEY!! 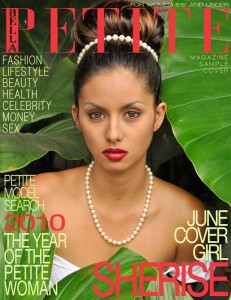 Get a fashion magazine you can identify with register now.  PETITE Women 5′5″ & under it’s time to join the petite women’s fashion movement.  Your source for petite fashion, petite models and issues that appeal to you the petite woman!

Get 20%-50% off Allison Izu, Fernanda Carneiro and My Sweet Petites clothing when you become a Bella Petite Member.