SHORT ROCKSTARS AREN’T AS TALL AS THEY APPEAR 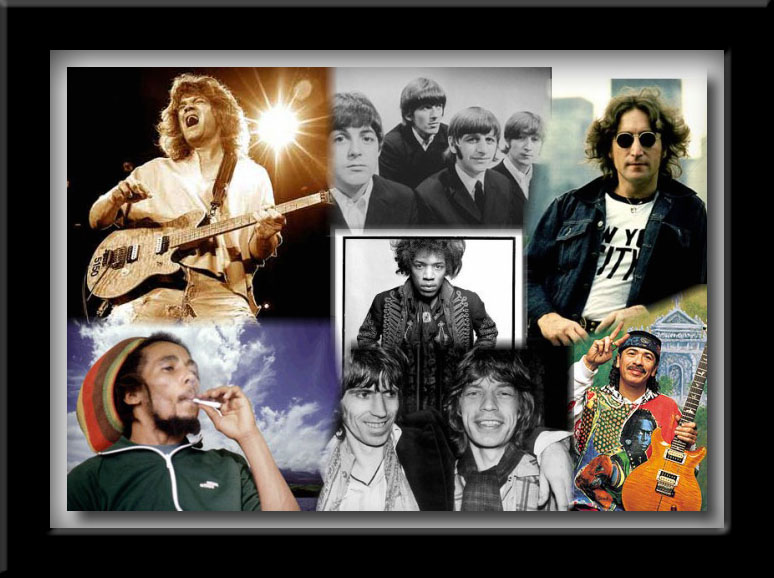 By Ann Lauren: More on the truth about height in entertainment. We’ve done the research and this is what we found out. The omnipotent rock gods with all powerful talent rocking our world may be musical giants, but no tall men here. These outrageous rock and rollers, gifted guitar gods, pack concerts. We look up to them onstage, but truth is many ROCK STARS are real shorties.

The world’s a harsh place ESPECIALLY for a short guy. Short guys are discriminated against in the work place, studies show short guys make less money than their male counter parts at 5’9″ plus. Music is the only place a short guy can go for salvation. Bands do not have height requirements. While most athletic teams, branches of the armed forces, and the business world has height requirements for performance and executive reasons. There’s nothing preventing a short man from shredding a solo at Madison Square Garden.

Do short men suffer from the Napoleonic complex? Many do and compensate for their lack of height by becoming overachievers or hostile. Or both. It’s not my job to psychoanalyze just to lay out some selectively chosen facts that make my case.

Keep in mind men lie about their height too, so likely they are two to four inches shorter then they claim…So. here it is, Rock’s Short List. SHORT People DO have reason to live, sorry Randy. It’s rock ‘n’ roll. They’re the biggest names in music, but some of the shortest height wise:

A Little known fact the average height of US men is only 5’8″.

Billy Idol – 5′ 8″ Idol’s real name is William Michael Albert Broad. This punk rocker just misses average height by an inch. Known for platinum blonde hair and eternal smirk, he burst onto the scene in the 80’s with hits Dancing With Myself and the creepy wedding anthem White Wedding.

Prince (5′ 2″)One of the most diminutive musicians around, Prince makes up for his height by wearing high heels, playing every instrument on his recordings, and making sure none of his women are taller than him – and wear flats.

Ringo Starr 5’8″ Ringo is the funny one with the big nose. He’s also the shortest member of the fab four known as The Beatles. As drummer of the most famous rock band of all time, Ringo kept the beat of the band and also merrily marched to the beat of his own quirky drum.

Who are you? Roger Daltrey that’s who – lead singer of British rock legends The Who. Daltrey boasts one of the a biggest voices in music, but he’s only 5’7“. Within The Who, Daltrey had a reputation for quickly punching anyone who disagreed with him, including the 6-foot-tall Pete Townshend.

Angus Young (5′ 2″)
The 54-year-old AC/DC guitarist has played the instrument since he was five. And he’s dressed in a schoolboy uniform the whole time. It’s the perfect way to get people to ignore your adolescent height: just dress like a kid.

Flea – 5’6” Hyper bass guitarist Flea of the Red Hot Chili Peppers is the smallest musician listed here. With a bouncing off the walls persona and lighting fast guitar licks, Flea lives up to his name as a small creature with energy to burn.

Flea, a native of Australia, fell in love with jazz first, later coming to love rock and helped form one of pop music’s most popular modern rock bands.

John Cougar 5’7″ The former Johnny Cougar fits the profile of an angry short dude. He was arrested at age eight for breaking and entering, started his first band at 14, and lost a college job for using profanity. To complicate the theory, though, his wife is supermodel Elaine Irwin, who stands at 5 feet 11 inches.

Bono (5′ 7 1/2″)Bono is the classic overachiever. He’s determined to be in the biggest rock band in the world, save said world, and receive all of its accolades (he’s the only person to be nominated for an Academy Award, Golden Globe, Grammy, and Nobel Peace Prize). If the dude was 6 feet 1 inches tall, we wouldn’t know who he is.

Thom Yorke (5′ 5 1/4″) The Radiohead singer’s height is overshadowed by another physical trait: his left eye, which was closed shut at birth. Yorke underwent five operations by the time he was six to correct it. He was left with a drooping eyelid.

Ronnie James Dio (5′ 4″) Dio sings so loudly and looks so satanic that no one would notice his elfin height. That is, unless you paid attention to some of those early band names, like Electric Elves and Elf. Those were unfortunate.

Iggy’s bare-chested stage antics distract from any height issues his fans may possess. Between the self-mutilation, stage-diving, and self-exposure, who’s counting inches (no pun intended)?

Bob Marley (5′ 7″) The Rastaman was proof that big things come in small packages. Marley is as close to a musical deity as you can get. He had a sound and a message that transcended mere mortals. And with his lion’s mane of dreadlocks, you’d think you were standing in front of a giant.

The next article in our series on the truth about height in the entertainment industry will cover hot PETITE female ROCK STARS! We’d lover to read your comments on our BLOG. Bella Petite will continue to bring you insightful interesting content on the petite world!

Get your free online issue of Bella Petite Magazine today and see what all the buzz is about! Printed editions are also available for order at bit.ly/bellapetitemag

Get your free online issue of Bella Petite today to see what all the buzz is about! Print editions are available for order at bit.ly/bellapetitemag