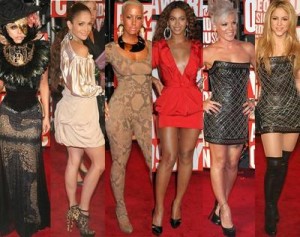 This year’s VMA’s, on the so-called “music television network” (which somehow retains the title despite no longer airing music videos), were quite the spectacle.  I have to say the VMA’s are in a league of their own when it comes to celebrity fashion, gossip, random feuds, meltdowns and buzz-worthy events!

This year’s event was truly a spectacular show at the Radio City Music Hall in New York, including an impressive tribute to Michael Jackson. Sister Janet rocked the stage like it was 1997 again, and her explosion onto the stage was pretty fantastic.  I will admit, I left my seat and found myself dancing along…  I’m not quite Janet, but if one petite can make it work maybe there’s a chance… or maybe not.

Later in the show Pinks performance was a convincing Cirque du Solei tryout, and the hottest petite popstar on the block, Lady Gaga, impressed again with her outlandish, but refleshingly unique take on fashion.  In my opinion, she delivered the performance of the night with “Paparazzi,” and also took home the Best New Artist Award!  Congrats lil’ Lady!

Madonna gave an emotional speech about her relationship with the King of Pop. Her speech was heartfelt and real.  Madonna did not hold back the criticism of Michael Jackson’s peers, which she admonished for not being there for him when false accusations were levied upon him.  Sadly, this kind of public intervention appears to have come a couple months too late.

“Sometimes, we have to lose things before we can truly appreciate them,” said Madonna. “Long live the king.”

I think I am obligated to mention that Kanye West is a “jackass” (thanks for the guidance on that one Obama)!  Kelly Clarkson’s poignantly smacked down Kanye on her blog, stating: “It’s absolutely fascinating how much I don’t like you. I like everyone. I even like my asshole ex that cheated on me over you… which is pretty odd since I don’t even personally know you.”

Pink was less wordy, but equally vicious toward West.  She Tweeted: “Kanye west is the biggest piece of s*** on earth. Quote me.”

I have to say the classiest act of the night goes to Beyonce!  What a save…