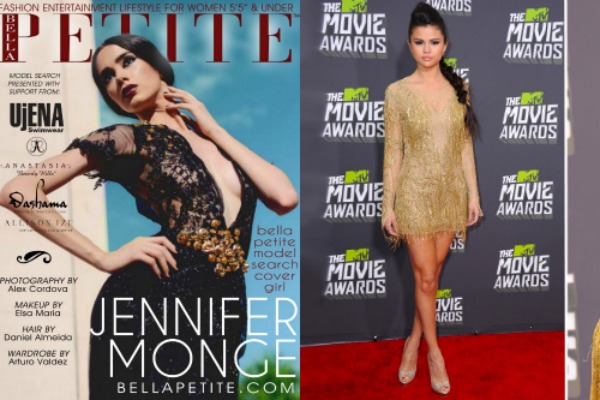 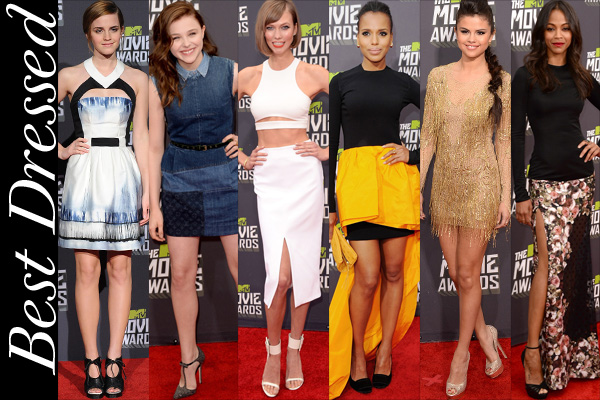 Recently the 2013 MTV Movie Awards, hosted by Rebel Wilson, was held in Los Angeles.  Before the big show gets underway, countless petite celebrities

walked the red carpet, so we thought it would be cool to recap some of our favorite looks. Whose look do you love best? Tell us below.

Selena Gomez (5’3″) looked chic while posing on the red carpet in a sexy fringe gold mini dress by Julien Macdonald. The “Spring Breakers” star took to the stage to perform her new single “Come & Get It.” Selena Gomez took the stage for a Bollywood-inspired performance. Gomez was red-hot as a Bollywood beauty on April 14, 2013.

No fashion faux pas here! Kim Kardashian (5’2″) showed off her growing baby bump in a figure-hugging black Saint Laurent Paris dress with some very strategic accessories on the red carpet. 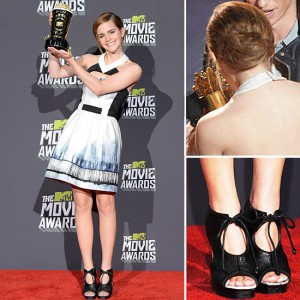 Joining her “Pitch Perfect” co-stars for a special performance, Brittany Snow (5’1″) dazzled on the red carpet in a sleek navy mini dress on April 14, 2013. The star also won for Best Musical Moment.

Emma Watson (5’4″) glamed it up in a Maxime Simoens dress while picking up the MTV Trailblazer Award.

The “Perks of Being a Wallflower” star showed off her golden popcorn after her big honor.

Snooki (4’10”) cut a slim figure (and a high slit!) in a floor-length gold gown (from her upcoming line Snooki Couture) and peep-toe heels to match on the red carpet. But in true Snooki fashion, the former Jersey Shore star brought the va-va-voom to the show with a tumble of curls.

We know MTV’s annual awards show calls for a more casual look, but Paramore singer Hayley Williams missed the mark and looked more like a jailbird in her cropped striped shirt and overalls getup. Adding to her odd wardrobe selection was her man’s underwear purse! 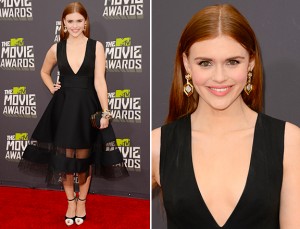 “Dancing With the Stars” pro Karina Smirnoff (5’4″) kept it playful in a flirty red peplum dress and silver pumps on the red carpet.

THE BELLA MODEL OF THE YEAR WINNER WILL BE FLOWN ALL EXPENSES PAID TO HOLLYWOOD AND THE UJENA JAM!

This year’s winner will WIN TWO TRIPS! She will be flown to Hollywood for a high fashion shoot for Bella Petite Magazine. Plus, she will win an all expense paid trip to the Ujena Jam in 2014.

Bella Petite Magazine is Fashion, Entertainment and LifeStyle for Women 5’5″ Tall & under. “Petite is fit and full figured. Free to subscribe !

Bella Petites Give Back! Event Coverage

BELLA PETITE MAGAZINE Enter the Bella Petite Model Search. WIN an all expense paid trip to California and the 2014 Ujena Jam and high fashion spread! The ONLY model search in the world for petite women 5’5″ tall and under. Petite models you can get discovered here on Bella Petite Magazine like Bella Petite Model of The Year Jennifer Monge!