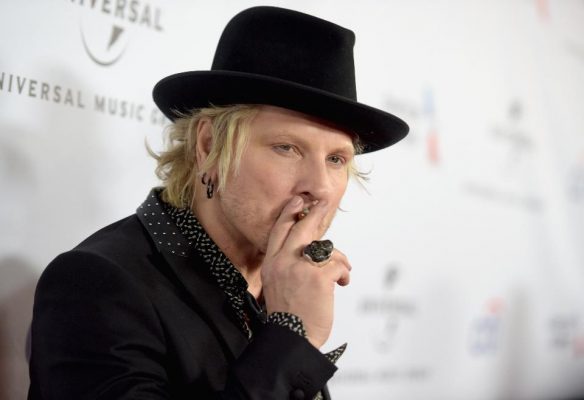 On Thursday, May 12th, I had the great pleasure of enjoying an all-access pass to Matt Sorum’s ‘Adopt The Arts’ benefit concert at the Fonda Theater in Los Angeles.  The event was produced by Sorum to benefit his Adopt the Arts Foundation, a charity he established to support arts education in public schools.  The event was a resounding success and an excellent time among old and new friends!

The show combined two of Matt’s greatest passions: playing with rock legends and raising money for arts education for children.  The evening’s positive spirit was indeed all about the kids and the foundation’s worthy cause!

Sorum held his annual fundraiser for Adopt The Arts Foundation, a program he co-founded to help raise funds to support music education in public schools.  As part of the foundation’s effort, Matt has two schools he fully supports (including paying all teacher salaries). “Every kid takes music and art; we have teachers that we pay, and have created the curriculum that uses books that we’ve created,” according to Matt.

Sorum had the idea of honoring Zander and Hughes after watching both artists’ inductions into the Rock N Roll Hall Of Fame this past April in Brooklyn. Sorum recalled, “while I was in Brooklyn, I was so happy to see it all happen. I thought it was such a long overdue thing. Cheap Trick especially, Deep Purple as well.  Both bands that should’ve been in the Rock And Roll Hall Of Fame a long time ago. Cheap Trick is probably one of the premier American rock and roll bands, and then I always used to say Deep Purple, in my opinion, was one of the great British three – Black Sabbath, Led Zeppelin, Deep Purple.  So, long story short, when it came time to do my event again, I thought Glenn would be fantastic to honor with an award and Robin is flying out from Florida with his wife.”

Both newly inducted Hall of Famers performed at the event, which also featured an auction of rock-related items, including signed guitars by Dave Grohl and Queen’s Brian May, as well as a Shepherd Fairey art piece on medal celebrating Black Sabbath.  By all accounts, the event was a tremendous success for those attending, and, more importantly, for the schools and children which stand to benefit from greater access to arts education thanks to the efforts of Matt Sorum’s and the Adopt the Arts Foundation.

Donate today to help “SAVE THE MUSIC AND ART” for our kids, Adopt The Arts!

Here is a peek at the concert action, backstage with Joe Perry, lead guitarist of Aerosmith, and Ace Harper, frontwoman of Ace is High (and Matt Sorum’s wife).  Check here at Bellapetite.com for more exclusive content from the Adopt the Arts show!

On the red carpet with Rock N Roll Hall of Fame inductees, Glenn Hughes (Deep Purple) and Robin Zander (Cheap Trick), each honored during the event.

If you have questions for Matt Sorum, please leave me them below, and I will ask him them on your behalf!