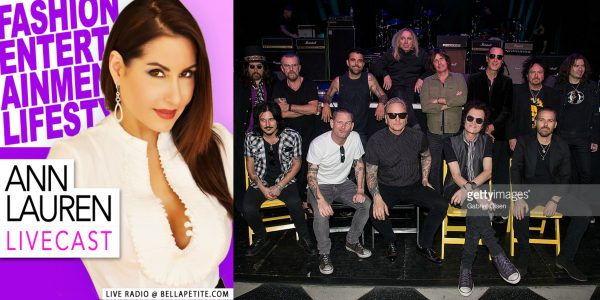 The front row at the Adopt The Arts (ATA) concert was a Marshall-stack-powered tsunami of intense bass and sonic power!  While so many have debated whether ‘rock is dead’, fans ultimately just want to be moved and have an experience, and a great rock ‘n roll show is still an experience.   The rockstar lineup at the ATA show brought such an experience and an emphatic reminder that rock ‘n roll is alive and well!

The event started off with Franky Perez of Apocalyptica’s rendition of ‘Whole Lotta Love’ by Led Zeppelin, performed alongside Damon Fox and Billy Duffy from The Cult, and Matt Sorum on stage to help out. Franky Perez sang his best song “Come Together” of the night shown with and Damon Fox’s keyboard talent was on full display.

The event is a truly unique opportunity to experience rock royalty in action for a great cause we [at Bella Petite Magazine] wholeheartedly support! The Rockstars have their hearts and wallets in the right place, as did the patrons who are lucky enough to get an invitation and afford the tickets all to support Adopt The Arts.

Adopt The Arts is a program co-founded by Matt Sorum to support music and arts education for public schools.

The sound of music turned to a call for donations as Sorum set aside his drumsticks at intermissions and hosted a live auction featuring memorabilia, art, jewelry, and autographed guitars.  The centerpiece of the auction, Joe Perry of the legendary rock band Aerosmith autographed guitar, which sold for $11,000. The benefit raised over $100,000 for ATA, so the evening was a huge success!