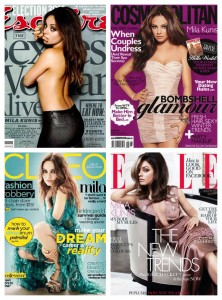 The sexy petite actress Mila Kunis was seen on many magazine covers this year. She appeared on the October cover of Esquire magazine as the “2012 Sexiest Woman Alive. The photo-shoot in the magazine shows Kunis getting progressively stripped down. She goes from wearing a black bra and leather trousers to topless and then finally concealing her sexiest parts with a thin white sheet.