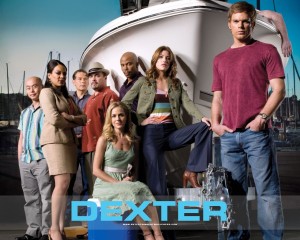 By Ann Lauren: If you DVR’d the Dexter season finale and haven’t watched it yet, read another Bella Petite post. Dexter’s season finale was by far one of the most distressing season finale’s in television history. The Showtime series was the most watched Showtime series ever with 2.6 million viewers, and those are only “live” viewers, mind you. This was the fourth season of Dexter and the most shocking finale yet. There was an elaborate cat and mouse chase with the Trinity killer (played by John Lithgow), whom Dexter (played by Michael C. Hall) was able to catch and kill in his usual swift fashion after weeks of toying with Trinity. The finale shocker is artfully unknown at the point of Trinity’s death.

Earlier in the episode Dexter had sent his wife Rita, played by 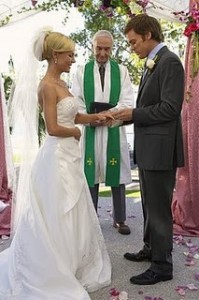 petite actress 5’3″ Julie Benz, off on a belated honeymoon. In the final scenes, Dexter returned home thrilled after his kill of Trinity to pick up his bags and meet his wife in the Keys when he noticed a message on his machine. Discovering the message was from Rita stating she had left her purse at the house and was on her way back, but was looking forward to seeing him later that night. Dexter was happy to hear her voice and decided to called her back, but was shocked when he heard her phone ringing. He followed the sound and discovered her purse sitting in the kitchen and turned just as he heard Harrison’s cries. He ran to the baby and discovered him sitting in a pool of blood – reminiscent to the way Dexter was found by Harry after his own mother’s murder. At that point Dexter and all of us realized that meant Rita was dead. Dexter turns to find her in the bathtub filled with blood in the same fashion Trinity had killed so many women 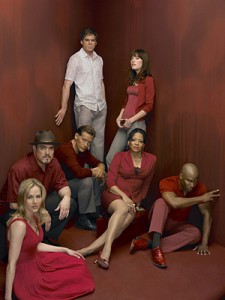 One things assured, it’s going to be a painstaking eight months of pondering the many plausible scenario’s of what’s going to happen next. How will his sister Debra Morgan (played by Jennifer Carpenter) and real life wife to Michael C. Hall, react at the scene of his dead wife? How will he explain the stark similarities to his colleagues? What will happen when Trinity’s family identifies him due to their past relationship? What will he do with the kids especially his biological offspring? It’s mind boggling, I can’t wait!

Now we wonder what will petite actress Julie Benz star in next? She was a thoughtful character on Dexter and she will be missed, unlike soap operas, I’m guessing they won’t 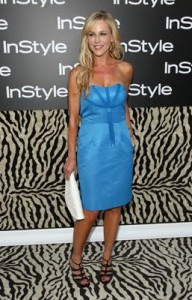 bring her back from the dead. Current projects in the works, now in post production 2009 “Bedrooms” its an evocative story about the walls that separate people, the heartbreak and infidelity that’s often the result and the redemption that comes from tearing those walls down (release date not yet set). She’s currently filming the movie “Answers to Nothing,” set against the backdrop of a missing girl case, lost souls throughout Los Angeles search for meaning and redemption and affect each other in ways they don’t always see. Release date set sometime in 2010, and we’ll let you know when. It’s also rumored that Julie Benz will star in Rambo V: The Savage Hunt. Great picture of Julie Benz wearing Fernanda Carneiro!

Bella Petite Members are eligible for our editorials, petite model searches, tickets to our fashion shows and events.  Also, get 20%-50% off Fernanda Carneiro, Allison Izu and Sweet Petites clothing when you become a Bella Petite Member! It’s EASY to join! Petite women unite to fight for fashion recognition in the marketplace. WE NEED YOU!