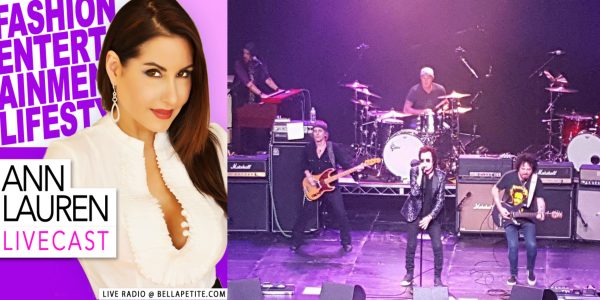 I was honored to personally interview Glenn Hughes though he’s well before my time it’s easy to hear he’s still got it!  Often I’ve dreamt of what it would be like to have grown up in the 60’s and 70’s back in the glory days of rock ‘n roll.

During the ’70s era, according to Glenn Hughes, the top competitive bands were Black Sabbath, Led Zeppelin, and Deep Purple.  Appropriately the ATA concert opened and closed the night out with Led Zeppelin

Shortly after the opening, an intro video was shown highlighting various significant moments in the life of Glenn Hughes, he accepted his award from Matt Sorum. Then he told a very humbling story about how important it is to help children in any way possible and that just because he never had his own children, except for the four-legged kind, it didn’t mean he couldn’t help others since he was gifted, financially capable and willing to give back.

Glenn Hughes then went on to sing one of the highlights of the evening, Deep Purple’s ‘Highway Star’, with help from members of Stone Temple Pilots bandmates Rob and Dean Deleo and drummer Chad Smith from the Red Hot Chili Peppers who should definitely be commended on their smokin’ hot performance.

Come back every day over the next few weeks to see our newest world premiere video release only here on Bella Petite Magazine! Where Rock Lives.

PARTICIPATE IN THE BELLA PETITE MAGAZINE FASHION AND MODEL INITIATIVE! COPY AND PASTE UP THIS FABULOUS GRAPHIC INTO YOUR FACEBOOK TIMELINE COVER HEADER!

Join Bella Petite the Bella Petite fashion initiative to support petite models and a greater selection of designer fashion for petite women. “Petite is fit, curvy and plus-sized. Bella Petite Magazine is Fashion, Entertainment, and LifeStyle for Women 5’7″ and under. Join us!

Enter the ONLY model search in the world for petite women 5’7″ and under!  And yes, we are the vanguard magazine changing the fashion industry antiquated rules! Time for change, it’s about time