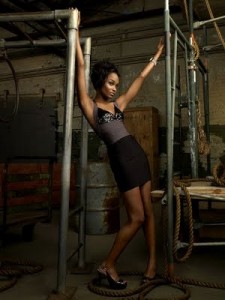 I have a feeling the Wilhelmina Agency is hoping ANTM can magically make the petite models tall.   This week was ANTM’s biggest improvement, mostly since Tyra was not on screen for the majority of the show.  Despite the lack of  Tyra, the show is still lacking and slow, but thanks to my DVR’s fast forward button I made made it through!

In the end, the latest model to go was Lulu, and somehow not Bianca!  I guess that’s what happens when you’re a little too pretty for Tyra.  For some reason Tyra apparently loves Bianca, and the rest of the models are starting to get the picture.

Overall the show was, once again, the same old negative  petite commentary 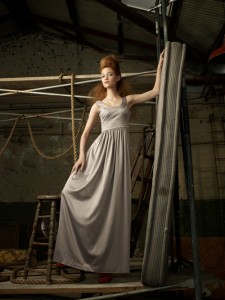 concentrating on the downside to being short.  There is a better way to promote petites, but ANTM’s clearly is not concerned with projecting a positive image to aspiring petite models.   I will admit, the runway instruction by Miss J was informative.  Although, I am sure  they could have found a “working shorter  model” (like Kate Moss) to prove you don’t need to be an amazon to walk well on the runway.  Instead they chose a ten year old, again resorting to undertones of comparing petite women to children.   I’m sure she would appreciate the “kiddie playhouse” the girls are living in!

The fashion show featuring amazon models next to petite models was awkward to watch, which was likely the intent.  The models lacked the attitude and confidence to stand out among their taller peers, with the exceptions of Brittany and Sundai. For the most part the petite models did hold their ground, with only a few stumbling down the catwalk. Models like 5’6″ Kate Moss regularly work with “amazon” models without looking intimidated or out of place.  These girls should stand proud as petites and rocked it!  I would have preferred the models’ initial exposure to the runway to be an exclusive petite fashion show, showcasing petite fashion on petite models.  The way it should be!

There is a clear DECEPTION being perpetrated by America’s Next Top Model and Wilhelmina Model Agency on hopeful petite models.  In an off the record discussion with a Wilhelmina Model agent Bella Petite learned the hard facts. Essentially, it was confirmed that there is not a specific agent representing the winner of ANTM since they don’t have a petite model division and have no future plans for such a division.  The contract awarded by WMA to the ANTM winner will be non-exclusive. It’s a sham deal for the winner.  In fact, never in WMA history have they booked a job for a model under 5’8″, unless she was 14 and even then she was 5’7″. In addition, this WMA agent was not hopeful for any real marketability of a petite model in the fashion, editorial, commercial or parts modeling print industry.

Stay tuned to BellaPetite.com, as I have scheduled an “on the record” interview with a WMA agent and the winner at a later date.  I was referred to their public relations agency in New York, and you can be sure that I will report the facts about WMA and ANTM.  It appears that until the ANTM winner is announced no comments or interviews will be made from WMA’s PR firm.

America’s Next Top Model may not have the passion to enact real change in the petite fashion industry, I know what needs to be done and will show the big dogs how.  Petite women need a flagship with a captain at the helm leading the way to change and together we can do it!

5 thoughts on “America’s Next Top Model “Make Me Tall””