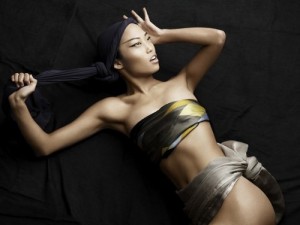 By Ann Lauren: ANTM Episode 8 “Interview 101” was an extremely informative and relevant show.  The models put their interviewing skills to the test as they interviewed 90210’s Jessica Lowndes on the set of “The Insider.”  Plus the models were challenged to write their own scripts for CoverGirl commercials.  These two dynamic challenges put the models through a crash course on what skills are required in the real world of modeling and commercials, including exercising versatility and demonstrating personality.  It was  positive message, proving you need to be MORE than a pretty face!

This episode of ANTM was right on the mark.  It had all of the right elements in place.  They booked perfectly petite guests from the start, with beautiful petite star 5’2″ Jessica Lowndes from the new 90210.  Jessica Lowndes was born in Vancouver, British Columbia, Canada in 1988.  She studied at the Pacific Academy in Surrey, and is an actress and an aspiring Singer.  Jessica plays the role of Adrianna Tate-Duncan on 90210, where her character is a teenage, former-junkie, pregnant high school student/actress.  The role of Adrianna was meant to be a recurring guest role, but due to the popularity of her character with fans, the 90210 producers decided to include her as a regular.  Lucky Lowndes was discovered in 2005 by the producers of the series Masters of Horror.

The standout petite model for this show was 5’5″ Jennifer.  She did a great job in her “The Insider” mock interview with Jessica Lowndes.  Jennifer started the interview segment and from the onset she was in control, well poised and set the bar high for the rest of the models.  The worst interview performances delivered were from model Laura, who really doesn’t have the charisma or intelligence required, and Erin and Rae disappointed as well.

The Covergirl commercial challenge proved to be a tough challenge for most of the models, but clearly not for Jennifer.  Again, she scored with her on-target delivery and truly decimated the models in this challenge.  The other girls fell short.  The worst commercials came from Rae, Laura and Erin.  Erin was truly horrible and should have been kicked out for the way she handled herself with incessant crying and an emotional breakdown.  Talk about unacceptable, in the real world she would be out on the first take.  As for Rae, her exit wasn’t a surprise as she failed both challenges, which will earn you a ticket out of the competition most weeks.  After this week, I would argue that the top three models are 5’3″ Sundai, 5’5″ Jennifer and 5’5 Brittany.

This weeks guest judge was Reality TV star and petite (5’1″) Kim Kardashian.  This was a good choice by the ANTM producers, as they rarely utilize true petites as

guest  judges.  This is one of those rare occurrences where the judge was a good fit and offered relevant advice to the petite models, while exercising reasonable judging tactics.  Nice job Kim!

Next week we’ll be looking forward to recapping the show. Hopefully it will be equally entertaining and useful for the petite models in their quest to become America’s Next Top Model.

Become a member and tell us what you’d like