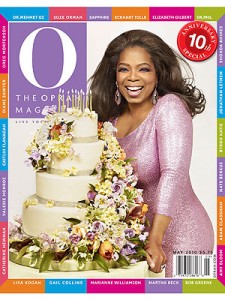 On May 7th 2010, petite full figured Oprah was all “glam’d up” and had nowhere to go – that’s because she was already at the “showplace of the nation,” New York City’s landmark and favorite entertainment venue, “Radio City Music Hall!” Oprah was celebrating her “O” magazine’s 10th year in production…definitely a milestone!

This petite megastar wore the same gorgeous, “Barbie” pink, sequined gown (that she wore on the “120th” cover of “O” magazine), but in a twist, morphed the gown into a two-piece outfit fit for the occasion! Oprah said that she didn’t want to “waste the dress,” so she left the bottom of the gown as is, but made the top from, what appears to be, a light pink “city-stretch” button up shirt – what a great idea, and so classic looking! 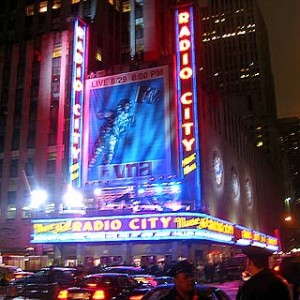 Oprah pulled out all the stops for this commemorative event, having a “superstar” team of experts, never appearing together, “under the same roof,” as Oprah exclaimed! She says they are the “best in the world…and the best in what they do,” and have “saved lives,” by contributing their “expert” tips and advice in her “O” magazine.

Who is this “dream team” Oprah is referring to? Well, two of them are none other than her own “pups” who have left the kennel – “Dr. Phil and Dr. Oz.” She called them her pups because after appearing many times on her daytime talk show, they both have their own TV shows now – “The Dr. Phil Show” and “The Doctors”). The other two members of the “dream team,” are “Nate Berkus,” the good-looking decorator who likes to surprise America, and every woman’s best financial advisor, “Suze Orman.” Being active “O” magazine contributors, they all came together to help celebrate this event and to offer up some of their favorite advice that’s in the 10th Anniversary edition.

Dr. Phil, who got his big break after appearing on many of Oprah’s shows, offers up

one of his top ten pieces of advice from the 120th issue of “O” magazine, saying, “Find a game changer for yourself…many of us get into “ruts” in our lives and wind up easily living somebody else’s script for a life…we end up just doing what we’re expected to do, and it’s so easy to wind up just going through the motions instead of doing what you really want to do.” “You’ve got to get a passion in your life…be willing to do something different, whether it be changing your schedule, rearranging your furniture…trading wardrobes with a friend, not husbands (his words, not mine!), just do something different!” says Dr. Phil. But before he could even finish his last sentence, Oprah chimed in asking what he’s going to do to change, to do something “different.” Dr. Phil gave her an unfavorable look, but said, “I’m going to practice what I preach, so I’m going to shave my mustache off right here and now!” Well, he did it! Right there on stage, he shaved off his mustache after having it on for almost 40 years! He said his two sons have never seen him without it, and his petite wife, Robin, said the last time she’s seen him without a mustache, was 38 years ago! 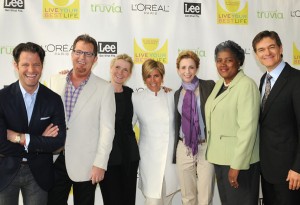 Got Sex? Add Three Years to Your Life!

Oprah’s next “pup” to bark out some of his favorite top ten pieces of advice, was Dr. Oz. he was Oprah’s special guest for 8 years, and now has his own TV show called, “The Doctors.” He states that his favorite piece of advice from the 10th Anniversary issue is, “People must show-up in their lives…you got to act first, then you will be motivated – most think it’s the other way around.” His second favorite was, about having sex. No really – he says having sex will add “years” to your life! Dr. Oz said, “People should go to bed 30 minutes earlier than their normal bedtime. This promotes growth hormone and stimulates your libido, and since you’re in bed, why not have sex? Instead of America’s average of once a week, why not do it twice a week? It will add 3 years to your life!” Wow, I need to get “busy!”

Oprah’s about ready to lose another one of her “pups” with “Nate Berkus.” He will be leaving Oprah’s kennel soon, where he will be hosting his own show this September. Nate’s advice from the tenth year, mighty “O” magazine was, “Edit, Edit, Edit – don’t have everything you own out all at once. Find one area to display your things. He also offered up a money-saving tip when shopping for paintings or photography for your home or office. Nate says, “Find a great art school in your town, see what the students are doing – it’s one of kind, and you can get them at a great price.” His last piece of advice, “Honor yourself by surrounding yourself with the things that tell the story of your life – who you are, where you’ve been, and where you aspire to go.” Now this, I like! 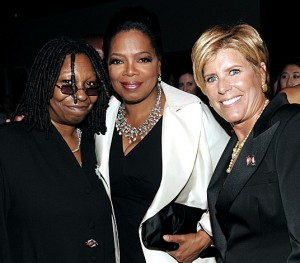 Suze Orman (I don’t know if she’s a petite), made her debut on Oprah’s show in 1998 and has been dishing out priceless advice on money strategies for financial security for years. One of her top ten favorites is, “having an oath to financial honesty; if you have credit card debt, then you’re living a lie!” At that point, Nate spoke up and said, “well, I guess I’m lying because I just put this new outfit on my credit card!” Too funny because I’m sure many people in America are doing the same thing, I know I do, but like Orman says, “pay it off at the end of the month, and it’s okay. However, her main advice, and has been for the past 12 years, “Stay honest, don’t use credit cards, use only cash!”

During the next segment of the show, Oprah had “O’s” creative director, “Adam Glassman” on to narrate a quick fashion show consisting of famous celebrity moms and their children. But first, they sat and chatted a bit about some of their favorite cover shoots. Glassman has picked out all of Oprah’s clothes for the past 10 years of “O” magazine covers (that’s 120 outfits!). He said his favorite cover was when Oprah wore the bathing suit. Oprah sneered at this comment and said in her “OMG why?” tone, “Why would that be your favorite…I hated that shoot?” Glassman replied, “Well, it’s not my favorite shoot, but my favorite story because it took you five years to finally do it…and even then, most people don’t know that you were wearing pants and fully dress in the pool with only a little part of the bathing suit showing!” They both laughed. 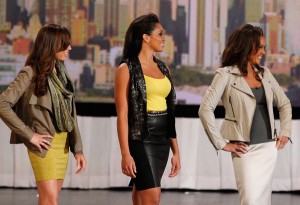 The fashion show featured hot styles for 2010, and Glassman’s must-haves for any wardrobe.  The celebrity mother and daughter fashion show began with the 5’4″ beautiful Vanessa Williams looking classic and stylish leading the way with her daughters at her side.

The beautifully, petite Jane Seymour (5’1”) was modeling a gorgeous red dress with an animal print tunic sweater, along with a “nude” shoe. Glassman says “the nude shoe makes you look taller and 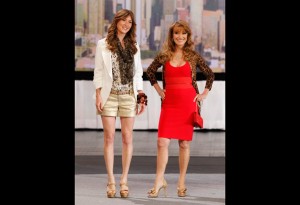 That’s great for us petite glamour-puss’s! He also said that animal print never goes out of style, and goes with everything! I’m SO about “animal print,” heck…I lived in Jersey once <wink>.

Next to come on stage was very petite, 5’1” Susan Lucci and her son. 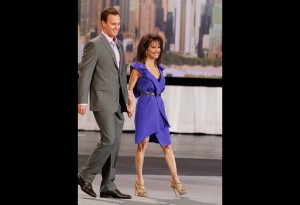 She wore a wrap-dress (another closet must-have), which Glassman says it “defines the waist and covers any flaws you might have.” Lucci wore a thin black belt around her waist and paired the dress with diamond hoop earrings.

Make a “Statement,” with your SHOES!

Another closet must-have is the “sequin scarf!” He said it instantly changes your wardrobe, and makes everything look great! I would have never thought that until I saw L’Oreal Paris model, Dale Haddon (5’7 – I know, she’s not a petite, but she’s also not an AMAZON!) come on stage in her fabulous outfit! She looked amazing, and it’s true, that sequin scarf took a casual outfit and jazzed it up 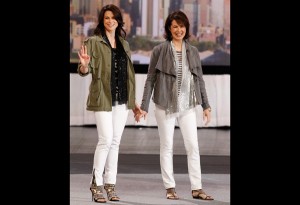 Another piece to add to your wardrobe is the “Khaki Cigarette Pants and the “white shirt” (Glassman says, “One can never have too many 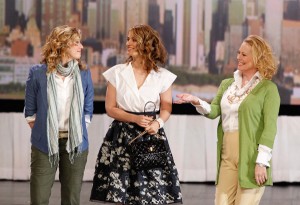 white shirts!). Amazon model/actress “Cybil Sheppard” demonstrated how cute this outfit can be – she paired them with a sexy “statement shoe,” bright fuchsia high heels! Her daughter wore a 1950’s inspired, navy-blue and black, “fit and flare” skirt, which was adorable – wait a minute, I thought “navy-blue and black” together was a “Fashion Faux-Pas?” Well, I was wrong! Glassman says it’s absolutely fine to put the two colors together!

Petite Pop-Queen Does It Again 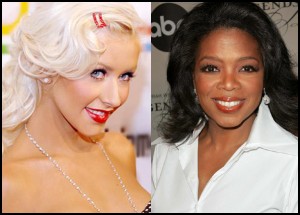 Oprah concluded her show with the petite pop-queen, 5’1” Christina Aguilera singing a song from her long awaited, new album, “Bionic.” It’s been 4 years since her last album, but this new mom wanted to take a break from the pop world to focus on her family, her two year old son, Max, and to decorate her and her husband’s over-the-top mansion, which was once owned by the petite, 5’2” Sharon Osbourne (okay, Ozzie too).

Aguilera says the break has been “good for her,” allowing her to absorb her surroundings, be a part of “life,” so she can be inspired even more so as an artist. Earlier this year, Christina took a trip to Guatemala where she became the UN ambassador for world hunger with the WFP (World Food Program). When she heard that a child dies every 6 seconds from hunger, she knew she had to be a part of this program.

Aguilera said, passionately, that her new album “Bionic” was inspired by how “super human” women are. She’s floored by the gift of life, and is in awe how “super human” women are! She said that since having a child, she feels “sexier” than ever before. “Bionic” will be out in stores, June 8th, and tickets for her world tour will go on sale at livenation.com on May 21st. Written by: Tana Corporon 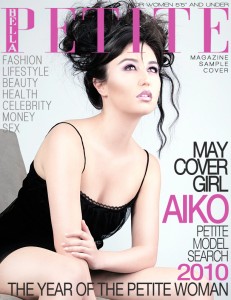